Mission Creek Preserve: The Life and Death of the T Cross K Ranch

Mission Creek Preserve: The Life and Death of the T Cross K Ranch

Drive north out of Palm Springs on Highway 62, past Desert Hot Springs, and the appreciative eye is drawn towards the majesty of Mount San Gorgonio to the west. 11,503 feet above sea level, and about 9,000 feet above this place right here, the Mission Creek Preserve.

In a land that is a little bit Mojave Desert, with a touch of the Sonoran Desert thrown in for good measure, Mission Creek Preserve is an often-overlooked gem on the way to its more famous and bigger cousin, Joshua Tree National Park. Mission Creek Preserve offers 4,760 acres of contrast and mystery, just up the road from Interstate 10.

Just what is this place, anyway? Some believe it was a Civilian Conservation Camp from the time of the Great Depression. ‘Taint so! Fact is, it was a ranch of a kind, catering to the Hollywood elite, years before Palm Springs took off to world-class stature.

The Life and Times of the T Cross K

Long before T Cross K Guest Ranch was even a twinkle in somebody’s eye, special commissioner for the Mission Indians, Charles A. Wetmore, encouraged President Grant in 1876 to set aside land for reservations, and in 1877 the Mission Agency was established…one of the reservations created was Mission Creek reservation, of which George Wharton James, author of The Wonders of the Colorado Desert (1906) aptly wrote, “Then the white man came and drove the Indian out (as he had no legal title) and built an adobe house.”

The Mission Creek reservation seems to have been labeled as “hog ranch” for a number of years. R.T. Hill, author of Southern California Geology and Los Angeles Earthquakes (1928), commented that “The eastward continuation of the Mill Creek Fault passes by the little Indian reservation marked ‘Hog Ranch’ on the southeast corner of the San Bernardino topographic map of the United States Geological Survey.” It was again shown as “Hog Ranch” on the Punnett Brothers sectional map published in 1906.

Note: Many thanks to local Virginia Anderson Neal, who informed us the ranch was originally owned by Talmage and Kimberly thus creating the name T Cross K.

Author Cabot Yerxa was the first to write about the ranch by name. He recalled that in 1912 Frank William DeLong (1886-1950) and his wife, Francis, bought the T Cross K as a cattle ranch in Mission Canyon alongside Mission Creek. It even had its own cattle brand. In those days, cattle ranged the desert very freely. But the hog ranch designation persisted, according to a Bureau of Soils Map of 1917. Frank was often a frequent character mentioned in the Desert Sentinel‘s colorful weekly excerpts from Yerxa’s book of the same title, On the Desert, recalling Yerxa’s bountiful adventures and is considered the founding father of Desert Hot Springs.

John S. Brown, author of Routes to Desert Watering Places in the Salton Sea Region, California, published in 1920, was quoted in David G. Thompson’s book titled Mohave Desert Region, California: a Geographic, Geologic, and Hydrologic Reconnaissance, published in 1929 “…to the right is the road to the resort town of Desert Hot Springs; farther along, to the left, is the road to Mission Creek and the T-K Ranch. In this area, the road crosses the Metropolitan aqueduct, carrying water from the Colorado River to Los Angeles…”

Mr. Brown continued, “In January, 1918, a board sign directed along this road to the T-K ranch, 1 3/4 miles away, the old road entered the canyon, passing through the foothills of the San Bernardino and Little San Bernardino Mountains.” Note the differences in spelling of the ranch.

In July 1928, the San Bernardino Sun reported the T Cross K Ranch was sold to Norman Ferra. Evidently Frank DeLong and a local Native American named Steve Kitching, had been feuding over water rights for some years. At the time, T Cross K had about a dozen cabins, a large ranch house, and a swimming pool. Ferra planned on improving the property and establishing T Cross K as a dude ranch, managed by an expert, with a fine string of horses for use by the guests. The Ferra brothers were said to be on very good terms with local Indians. The DeLongs went on a trip to Oregon after the sale. Incidentally, Kitching Peak above Cabazon is named for the the same Kitching family.

The T Cross K Guest Ranch was doing well in 1935, and was advertised in local newspapers. At that time, a local well driller and oilman in the Coachella Valley, named John “J.R.” Holliday, managed the ranch. In an April 1935 article in The San Bernardino Sun, JR was referred to as the owner of T Cross K.

Perhaps to distance himself from the more famous John “Doc” Holliday of Tombstone fame, J.R. Holliday appeared to be doing well, and the ranch was a popular attraction in the Coachella Valley.

These four stone cabins are at the entrance of Mission Creek Preserve and contain shaded concrete picnic tables nearby a dry fountain, former swimming pool and tall stone fireplace. Complete with a babbling brook, everything is within an easy walking distance from the parking lot. The awe inspiring Mount San Gorgonio –the tallest peak in California– stands as a Goliath sentinel in the background.

By the 1950s, we find that the T Cross K Guest Ranch had undergone a name change by its lease owners, Jack and his registered nurse wife, Jerry Wilkenson, but remained a popular guest ranch. In early 1952, a local newspaper article deemed it “King Saul Guest Ranch” but advertisements later that same year referred to it as “King SOL Guest Ranch.” Its Grand Opening took place on August 16, 1952. Ads in local papers claimed Bessie, the ranch’s cook, whipped up dinners that couldn’t be topped.

Still an attraction to the elite and health-minded, the Ranch which apparently reverted back to its former name of T Cross K. An ad in the local paper in March, 1960 sought to sell 25 French windows, a 10 KW diesel, horse trailer and other items.

The T Cross K remained in operation until May 1, 1960, when a fire destroyed the two main buildings, leaving only the fireplace and the walls of four stone cabins. Five fire units fought the blaze for 8 hours. The fire damage totaled $42,000 dollars. It was attributed to faulty electrical wiring.

Mrs. Burnam got re-married to Dudley Walters, a professional horse racing gambler, six months later, in November 1960. They had a lavish wedding reception at Highlanders Restaurant in Desert Hot Springs on January 15, 1961, which was attended by over 250 guests.

The ranch eventually became the property of the Wildlands Conservancy, the largest private non-profit landowner in California, that operates the Mission Creek Preserve to this day. It’s doubtful the former owners ever imagined the ranch would someday be part of something called the Sand to Snow National Monument. But how did it all come about?

You see, way back in 1994 under the California Desert Protection Act, conservation of the San Gorgonio wilderness was increased to 38,000 acres, allowing the creation of Mission Creek Preserve. In 2004, U.S. Senator Dianne Feinstein, a strong proponent for the Desert Protection Act, was the guest speaker at Mission Creek Preserve for a gathering to celebrate the Act’s tenth anniversary.

By December of 2010, Senator Feinstein introduced a 170-page bill called the California Conservation Act of 2010 which fleshed out previous conservation acts for consideration to the Senate Energy and State Resources Committee, seeking to balance beauty and growth. Spurred by conservation groups such as the Sierra Club, Wildlands Conservancy, Mojave Desert Land Trust, Defenders of Wildlife, The Center for Biological Diversity and Friends of the Desert Mountains, Senator Feinstein took further action. Come 2015, the Senator urged President Obama to create national monuments.

In February 2016, invoking the 1906 Antiquities Act, President Obama via executive order authorized the creation of the Sand to Snow National Monument, which encompasses Mission Creek Preserve, thrilling conservationists and outdoor enthusiasts who had long fought for the beloved landscapes be protected from development. The Sand to Snow National Monument stretches from the desert floor near Palm Springs to the peak of San Gorgonio, comprising 154,000 acres. The Mojave Trails Monument is larger, spanning 1.6 million acres and surrounding historic Route 66, between Mojave National Preserve and Joshua Tree National Park.

However, in September 2018, the Desert Hot Springs City Council voted 4-1 and approved Adkan Engineering to build Mission Creek Trails, a 481-acre development which could include almost 2,000 homes, commercial space, a park and walking trails if fully built out. The project, which has come before the council in different iterations, sits on the west side of Highway 62 at the entrance to Mission Creek Preserve and Sand to Snow National Monument. In October 2018, conservation groups filed a lawsuit against the proposed project. The project area is home to imperiled wildlife, including the burrowing owl and Palm Springs pocket mouse.

Cholla cactus and Mojave yucca dot the desert landscape at the preserve entrance while a single crag of the San Jacinto mountains splits the horizon.

The moderate eight-mile trek one way from the entrance of the Mission Creek Preserve parking lot, adjacent to the remains of the T Cross K, to the Whitewater Preserve has a 1,300-feet elevation gain and one of the best spring flower displays following a wet winter, and great views of Mount San Gorgonio.

The ranch, in its heyday, sported a wading pool and fountain in addition to the standard fare of dude ranches everywhere, horseback riding.

If you want to hike further into Mission Creek Preserve, and we hope you do, you will find the spacious “Stone House” just one and a half miles from the picnic area down a scenic trail, mostly next to the creek. It re-opened last April after damaging floods eroded the road. The rock strewn trail is rated moderate. Closed toe shoes are recommended.

Mission Creek Preserve is open to the public free of charge seven days a week from dawn until dusk.

Seeing blooming wildflowers in December is always a nice surprise following a few seasonal showers earlier in the month.

It’s fun identifying the many resident and migrating birds in the area. Dogs are allowed on leash.

Wildlands Conservancy accepts group reservations 48 hours in advance for tent camping and use of the house. There are clean facilities and potable water on site. You will be able to drive past the gate for the 1.6 miles from the parking lot to the Stone House.

You can hike two more miles past the stone house to reach the Pacific Crest Trail, which spans from Mexico to Canada. The PCT runs up Mission Creek, through San Gorgonio Wilderness and Sand to Snow National Monument, from about mile 226 to mile 240.

So there you have it, folks. Scandal, intrigue, and politics. Nothing’s as simple as it appears on its surface, that’s for sure. We suggest you put all that aside, and let the desert work its magic on you. Breathe in that fresh air, listen to the trickling of Mission Creek, maybe even watch a hawk or two soar thru the sky, but above all drink in that precious commodity called silence. Let your mind drift and know that at least for right now, this very special spot on the planet will live on to infinitum thanks to the diligent efforts of champions behind the scenes. It will renew your spirit and bring you peace.

DRIVING DIRECTIONS TO MISSION CREEK PRESERVE: From Interstate 10 past the Highway 111 turnoff, exit Highway 62 toward Yucca Valley then proceed 5.5 miles to Mission Creek Road (see the small green sign on right)…. turn left on Mission Creek Road and follow it approximately 5 miles on a two lane dirt road to the gate.

A Peculiar Piece of Desert, the Story of California’s Morongo Basin by Lulu Rasmussen O’Neal, 1957. 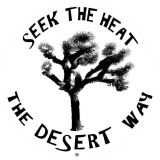 Pioneertown: Tell Them Pappy Was Here

Big Morongo Canyon Preserve: Walk on the Wild Side

Doble, California: The Boom Town That Refused to Live

Buy us a coffee
The Mother Lode